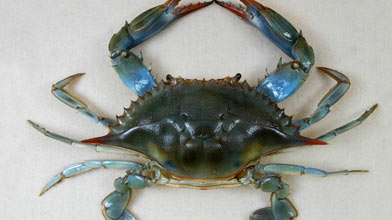 The blue crab, one of the most valuable crustaceans in the United States, is aptly described by its scientific name, Callinectes sapidus; Calli beautiful; nectes swimmer; and sapidus savory.

Blue crabs, like other crabs, possess five pairs of legs, with the first pair equipped with pincers. Crabs have a hard shell or exoskeleton. The shell is brownish-green or dark-green and drawn out on each side into a long spine. The underside of the body and legs is white. Male and female claws show varying amounts of blue on top. The tips of the female's claws are bright red.

Blue crabs shed their external shell periodically to grow; this process is called molting. Before molting begins, a new soft shell forms inside, and the crab backs out of the old, loose shell.

Blue crabs are found along Florida's Atlantic and Gulf coasts. A shallow-water crab, it can live in salt, fresh, and brackish waters of bays, sounds, channels, and river mouths. Blue Crabs are omnivorous, feeding on plants and animals. During the winter months, blue crabs move into deeper water and enter a state of semi-hibernation.

Blue crabs are harvested by dredges, trawls, pots, trotlines, and dipnets. They are marketed in the hardshell and softshell forms, with the delectable softshell crab available fresh or frozen. Hardshell crabs can be purchased live or fresh-steamed. If purchased live, they should show movement. Discard dead crabs.

Fresh and pasteurized crabmeat are packed and priced according to the size and integrity of meat pieces and chunks. Meat types include: jumbo; lump or backfin; special, flake, regular or deluxe; claw; and mixed. Cocktail claws are also available (claw with the shell removed to expose the meat except for the forward tip of the claw).