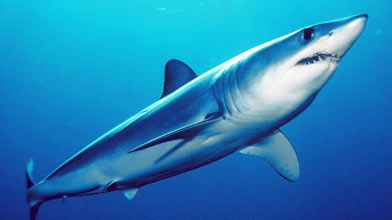 The word "shark" conjures up images of a sinister movie character. Actually, this ancient creature is one of the most delicious food fishes the ocean has to offer. While most Americans are not familiar with shark, it has been a valued food in some countries for centuries.

Sharks have changed little in millions of years. They are characterized by a cartilaginous skeleton (i.e. no true bones), 5-7 pairs of gills and movable eyelids. Sharks do not swim like bony fish. Except for the tail, sharks do not use their fins for propulsion, but use their pectoral and dorsal fins for stabilization and balance. Most bear live young after a gestation period ranging from six months to two years. Some sharks lay a small number of eggs.

One hundred species of shark travel the oceanic and coastal waters in North America. Forty species, representing twelve families, are found in the Gulf and South Atlantic. Most popular are small (three foot to four foot) tiger, sandbar, dusky, blacktip, and silky sharks.

Sharks can yield more marketable products than any other single group of fishes: the flesh is used for food; the liver yields oils and vitamins; the entire shark can be rendered into fish meal or fertilizer; the skin can be processed into leather; they are used for biomedical research and dissection in anatomy courses; and their teeth often become jewelry.

The shark is especially appealing as a food fish because it lacks bones, is economically priced, has a pleasant flavor and is a versatile meat suitable for many recipes. Shark is available fresh or frozen, usually as steaks or fillets. The meat is very lean, white, and firm-textured. It is often compared to swordfish in texture and flavor and can be grilled, poached, pan-fried, baked, broiled, stir-fried, blackened, smoked or cut into 1-inch cubes for kabobs.

Care in handling is the key to success in cooking shark. Once landed, the shark must be bled and iced immediately. Shark meat can be presoaked in a light brine solution or milk to neutralize any residual ammonia. The dark meat along the lateral line and under the skin should be trimmed away to prevent "off" flavors. Most commercially caught sharks have been pretreated and should not require special attention.

Keep shark refrigerated at 32-38 degrees F. or store in a freezer at 0 degrees F. until ready for use. Thaw frozen shark in the refrigerator or under cold running water.