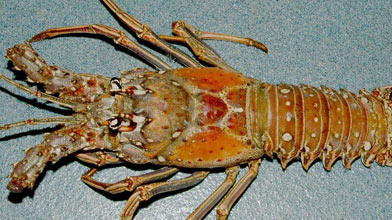 The spiny lobster is a crustacean related to crabs, shrimp, crayfish, and Spanish lobster. Common names include crawfish, crayfish, and Florida lobster. In Florida, the spiny lobster is caught off the Keys and around the southern tip of the state from waters of the Atlantic Ocean near the Florida Reef Tract. Fishery regulations specify a harvest season from August 6 to March 31.

The spiny lobster is characterized by numerous spines on the body, two large hooked horns over the eyes, a pair of long-jointed antennae, and five pairs of walking legs. It has mottled coloring of yellow, brown, orange, and blue markings over the body and tail. The tail is segmented and can be rapidly curled under the body to propel the lobster backward.

Like all crustaceans, the spiny lobster molts or sheds its shell to grow. Its diet consists of clams, snails, seaweed, and small marine organisms. Pre-spawning and seasonal migrations, called "marches," often occur, with lobsters forming a single file, moving from shallow to deep water.

Spiny lobsters are harvested using special traps at depths of six feet to 300 feet and are usually landed live. They are marketed as whole lobster, lobster tails, split tails and lobster meat. These products are available fresh or frozen, raw or cooked. The term "green" is used to refer to raw, uncooked lobster.

The lobster is a green color uncooked, turning bright red while cooking. Spiny lobster tails can be boiled, steamed, grilled, deep-fried, or broiled, or the meat can be removed from the shell and used with any recipe.

Spiny lobster should be refrigerated at 32-38 degrees F. or stored in a freezer at 0 degrees F. until ready for use. Thaw frozen lobster in refrigerator or under cold running water.