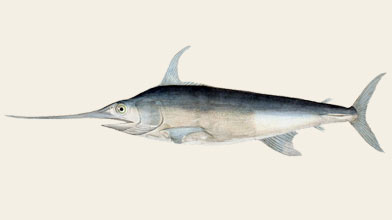 Swordfish, along with marlin, spearfish, and sailfish, are collectively referred to as billfish. Swordfish are the only species in an unusual family called Xiphiidae. This name refers to the sword-like projection of the upper jaw. Swordfish were first described by Aristotle, who used the Greek word xiphias, meaning "sword." The Romans used the term gladius, which also meant "sword." The scientific name, Xiphias gladius, is a combination of both names.

The swordfish is shaped like an oversized mackerel, with the body thickest in the shoulder area, tapering to a tail, which is reinforced by a keel on either side. Swordfish vary in color from deep brown to black on the back and upper surface of the body to almost white on the side and lower body. The long upper jaw and snout form a flat, sharp, double-edged sword, which may be as much as one-third the total length of the fish. They are large, aggressive fish sometimes reaching 14 feet in length and a weight of 1,200 pounds.

Swordfish are found throughout the world, including Florida's Gulf and Atlantic waters. They feed on a variety of fish and squid, foraging over great depths and distances. They are formidable opponents when harpooned and have been known to pierce the sides and planks of ships with their swords. In recent years, longlines (light cables suspended by floats near the ocean surface with baited hooks on short lines spaced over its length) have been used to catch swordfish and have proven to be more successful and effective than harpooning.

Swordfish are available as fresh or frozen steaks and chunks and can be pan-fried, baked, broiled, barbecued, smoked, poached or cut into 1-inch cubes for kabobs.

Keep swordfish refrigerated at 32-38 degrees F. or stored in freezer at 0 degrees F. until ready to use. Thaw frozen swordfish in the refrigerator or under cold running water.