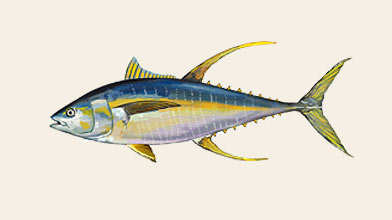 Tuna, one of mankind's most ancient and honored foods, were pursued by fishermen hundreds of years before the time of Christ. Ancient Greeks referred to tuna as "thunnos," for which they had an intense taste and admiration.

Torpedo-shaped and beautifully colored, tuna are members of the very large mackerel (Scombridae) family. They are one of the world's most important food fish. Members of this family travel in schools and are rapid swimmers. They are pelagic and restlessly roam the deeper offshore waters of Florida's Gulf and Atlantic coasts. Tuna feed primarily on fish, squid, crab larvae, and shrimp.

Yellowfin tuna can weigh up to 400 pounds, but average weights are much smaller in commercial catches. They are commercially harvested in Florida exclusively with hook-and-line, which makes the fishery "dolphin safe."

Yellowfin supplies a rich source of protein, vitamins, and minerals. It is considered a fat fish (more than 5percent oil content) and the meat is light and mild-flavored. Tuna can be smoked, grilled, blackened, baked, broiled, or sauteed. Overcooking robs tuna of juices and flavor.